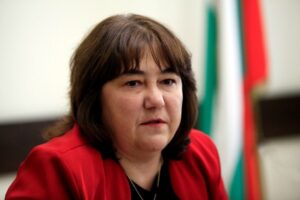 Bulgaria’s goal to accede to the Eurozone remains January 1, 2024 and the National Assembly is expected to pass three bills already submitted by the caretaker government and which are related to the ERM II postcommitments, Finance Minister Minister Rositza Velkova-Zheleva said in an interview for the Sega daily, her Ministry said on 16 January.

According to the procedure, Bulgaria has to request the so-called convergence report, which examines the fulfilment of the convergence criteria and legal compatibility and the request for its submission should be made in the beginning of spring at the latest, Velkova said. The positive thing about the 2022 budget closing is that the deficit on an accrual basis is 2.9% of GDP, on a cash basis it will be indicatively below 1%, she added.

The deficit on an accrued basis, which is within the criteria, is what is important, and Bulgaria also meets the debt criteria, Velkova explained, adding that inflation is the single grave challenge as part of the nominal criteria for Eurozone membership, which the government is doing its best to reduce.

“This is the year in which we meet all the numerical criteria without inflation, for which the war in Ukraine has had a very big impact. That is basically the thesis we will defend, but we are also trying to make additional efforts so that the deviation is less than it is at the moment,” the Finance Minister noted.

In addition to the surplus profit that Lukoil contributed in advance to the budget at the end of 2022, which will be directed to a fuel scheme, another BGN 100 million is earmarked for anti-inflationary measures, which will be used to develop actions to support vulnerable groups of citizens using bus transport, Velkova said.

Speaking in relation to the domestic political situation and the so-called extended budget act and how this affects the euro area admission procedure, Velkova pointed out that according to the European semester, Bulgaria has to have a three-year budget forecast for the period 2024-2026 and, respectively, a baseline budget that meets the deficit criteria on an accrued basis. This means that on a cash basis, the deficit must be below 3% and medium-term fiscal sustainability must be ensured while respecting fiscal rules. According to her – this base budget should at least be adopted by the government and tabled in the newly formed National Assembly if it comes to elections.

“We have received BGN 2.7 billion for criteria already met under the Recovery and Resilience Plan. These funds are absolutely uncontested, they are in the fiscal reserve, no more than BGN 100 million of which were spent in 2022. That is to say, we have the resources with which to implement these investments, which are indisputable and which will not be renegotiated, but the possible non-receipt of the second and third payment in 2023 will significantly affect the deficit in a negative direction, since the expenditure will be carried out on account of funds received in the previous year,” the Minister warned. She expressed concern that due to the political situation, it is quite realistic that there will be a delay in the second and third payment under the Recovery and Resilience Plan due to an objective inability to pass the necessary bills in time in the event of general elections.