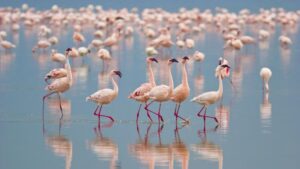 A documentary shows the challenges to the conservation of Bulgaria’s Atanasovsko Lake, one of the pivotal biodiversity hotspots in the Black Sea biogeographical region. Salty People will premiere in Sofia’s House of Cinema on January 31, said the Bulgarian Biodiversity Foundation (BBF).

Shot at Atanasovsko Lake in August 2022, Salty People presents the over-100-year history of the coastal lagoon through the stories of four environmentalists from the BBF, with salt, birds, and people being at the centre of the film. Diyana Kostovska, Gloriya Marinova, Radostina Tzenova, and Spas Uzunov talk about the hopes and fears of the people who have dedicated their lives to Atanasovsko Lake. The film puts an emphasis on finding the balance between the use of natural resources and nature conservation at Atanasovsko Lake, which is a reserve, a wetland of international importance, a Natura 2000 protected area, and the spot richest in birds, sea salt, and healing mud in Bulgaria.

The team behind Salty People are director and screenwriter Alexandra Val, operator Georgi Chelebiev, and drone operator Zivko Todinov. Mila Robert and Yavor Karagitliev did the music and vocals. The 27-minute documentary was made with the financial support of the EU’s LIFE Programme under the Lagoon of Life project and of the Sigrid Rausing Fund.

After the screening in Sofia, the audience will be able to meet with the documentary’s team and try cause products from Atanasovsko Lake, such as table salt, green salt, chocolate with sea salt, and Pelican soap.

Tickets are available at the House of Cinema and online at siff.bg/bilet. The proceeds will go into Atanasovsko Lake’s conservation.

Salty People will have screenings across the country throughout 2023. The film’s team will tour Bulgaria to discuss with audiences all the challenges facing Atanasovsko Lake and the people working on its conservation, the Bulgarian Biodiversity Foundation said.